A Decade in Markets

There was an unprecedented U.S. credit rating downgrade, sovereign debt problems in Europe, negative interest rates, the Brexit vote, and trade wars, all of which presented some uncertainty in the markets.

Despite this uncertainty, the last ten years have been very rewarding for investors.  Based on the MSCI All Country World IMI Index, (which includes large and small cap stocks in developed and emerging markets), on a total return basis, global stocks more than doubled in value from 2010–2019.

The last decade can serve as a good lesson why investors should separate the underlying investment fundamentals from the all the distractions in the world.  Uncertainty and investing go hand in hand.  Risk is the trade-off for reward.  Looking back over the past ten years, those who were patient and stuck with their plan were rewarded, despite the seemingly never-ending list of concerns.

Those concerns were apparent from the get-go, as a December 2009 headline in The Wall Street Journal read: “Bull Market Shows Signs of Aging [1].”  At the time, investors were still shaken from the stress of the financial crisis and skeptical of the recovery that began in March 2009.  The Bull Market was in fact not aging, but just getting going.  Here is what happened in the 2010’s: no recessions, only one negative year in the S&P 500 Index in ten years (2018), and the first decade ever without a single S&P 500 bear market on record (defined by a 20% loss).

A Reversal of Fortune

The economy did its part, somewhat, in fueling the market returns of the 2010’s.  Gross Domestic Product (GDP), the value of all goods and services produced by the U.S. Economy, did not increase by more than 3% in any year throughout the decade.  The economy was by no means booming, but also was without a bust.  Low, slow and steady growth was the reality throughout the decade.

Much of the 2010’s fortune was also related to just how bad the previous decade had been.  The 2000’s were bookended by two recessions and two market crashes.  In fact, the same large U.S. stocks that make up the S&P 500 Index and had such strong returns in 2010’s, lost money in the decade of the 2000’s, as the index was down nearly 10% or 1% per year, as seen below: 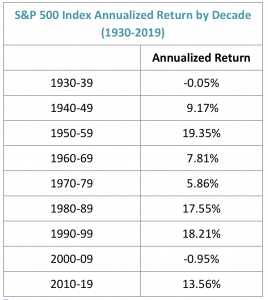 What Do You Mean, Reversion?

The fact that the S&P 500 followed one of its worst decades on record in the 2000’s with one of its best in the 2010’s is an excellent example of the fundamental investment concept of “mean reversion.”  Mean reversion predicts that historical returns will eventually return to their long-term averages.  Simply put, investments that boom must bust, and those that bust may subsequently boom.

The idea of mean reversion presents challenges for investors as we contemplate the next decade.  After all, would we expect another ten years of exceptional market returns, following a decade like the one we just experienced?  Mean reversion suggests that if the recent returns are higher than the long-term averages (which they are for large U.S. stocks), then future returns will be lower to bring it back down to the averages.

The appropriate response to protect investments from the swing of mean reversion is diversification.  After all, not every asset class behaves the same in any given period.  During the “lost decade” of the 2000’s, for example, investors in diversified portfolios were still able to make money in other asset classes, such as small or international companies.

Diversification can make you feel foolish. It requires patience through market extremes and can make you wish you hadn’t spread your investments, but instead put “all your eggs” in the market leader.  Regardless of how you might feel about diversifying your portfolio, we believe it is a great defense against market volatility and one of the best ways to manage risk in your investment portfolio.

The fundamentals of successful investing endured in the 2010’s, and we expect they will remain relevant in future decades:

Investors who follow these principles are likely to have a successful financial journey in any decade.

Perritt Capital Management and Windgate Wealth are not responsible for, and expressly disclaims all liability for, reliance on any information contained in any third-party sites.  No guarantee that information provided in these sites is correct, complete, and up-to-date.

Information here is obtained from what are considered reliable sources; however, its accuracy, completeness, or reliability cannot be guaranteed.

Certified Financial Planner Board of Standards Inc. (CFP Board) owns the certification marks CFP®, CERTIFIED FINANCIAL PLANNER™, CFP® (with plaque design), and CFP® (with flame design) in the U.S., which it authorizes use of by individuals who successfully complete CFP Board’s initial and ongoing certification requirements.