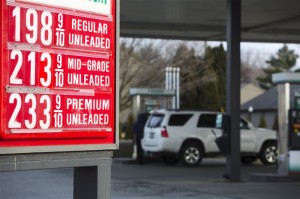 Depending on your region you may not have seen gas below $2.00, as shown in this picture, but you’ve certainly noticed the rapid drop in prices at the pump.  Oil prices peaked at nearly $150 in 2008 and are now about $50.  Gasoline selling at $4.00/per gallon gasoline seems like a far distant memory.  We know what these plummeting prices mean for your wallet (if you’re like us, you are still pleasantly surprised and smiling once a week when you pull in to refill), but what do falling oil prices mean for your portfolio?

Quickly, a recap of why prices are falling.  First, the global demand for energy worldwide is somewhat reduced.  The United States is the world’s biggest consumer of oil, and domestic energy demand hasn’t picked up as fast as typical following a recession, which may be attributed to alternative forms of energy such as natural gas gain popularity.  Second is the fact that oil is priced in dollars and as the dollar increases in value as it has over the past five years, the price of oil (or any commodity purchased with dollars) declines.  Finally, and perhaps most importantly, is oil supply.  The arrival of fracking and other improvements in energy production have increased the supply of oil worldwide.  The US has nearly doubled its production in the past decade – from approximately 5 million barrels a day in 2000s to over 9 billion today. At the same time, Saudi Arabia and other OPEC nations have decided not to cut back on their own production, keeping supply high and pricing pressure going downward.

…The recent sense that you are receiving a small windfall every time you refill at the pump is being felt and repeated by millions of Americans every week.”

Short term, falling oil prices have had a negative impact on investors.  The many unknowns about our future oil environment has created volatility in the broad markets.  More directly, there has been an immediate decrease in energy sector profits – about 10% of the S&P 500 Index.  The energy sector has also been one of the largest job-creating industries in recent years, creating many jobs and investment in capital expenditure.  With falling prices, much of this spending will likely stop.

Long term, lower oil prices can help both consumers and the economy.  Think of the last time you filled up your car.  It felt like you were saving money. The recent sense that you are receiving a small windfall every time you refill at the pump is being felt and repeated by millions of Americans every week. Collectively, this adds up to a significant stimulus. In fact, according to some estimates, Americans are spending $2.4 billion less each week on gasoline than they were in early 2014.  This savings can cycle through into other parts of the economy, leading to increased consumer spending and corporate profits, both of which are good for your portfolios.

Data here is obtained from what are considered reliable sources as of 5/31/2016; however, its accuracy, completeness, or reliability cannot be guaranteed.